One of the first things we had to determine when we created a Masjid Security Team was: How does this team interact with the existing administrative bodies? What is its relationship with the Masjid Shura (Board), and with the Executive Committee? This article demonstrates what we came up with.

Our masjid has two main administrative bodies: the Shura (or Board) and the Executive Committee. The (simplified) breakdown of responsibilities is as follows: The Shura sets larger policy and rules, and the Executive Committee is responsible for implementing the policies and for the day-to-day running of the masjid. There are, of course, other committees (like the Education Committee) responsible for their own areas, but still answerable to the Shura for larger issues.

This structure is illustrated in the diagram below: 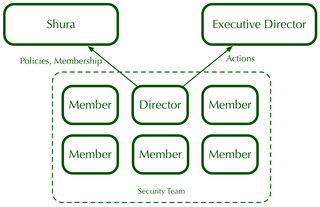 The Structure of the Security Team 1
© 2019 Aijaz Ansari
Masjid Defense by Aijaz Ansari is licensed under a Creative Commons Attribution-ShareAlike 4.0 International License.
Powered by Pelican